Last weeks have been information prolific and Dani visited Dr. Zenebe. Doctor has concluded that for some time a surgical intervention should not be beneficial, and that is what you can read underneath from Tesfaye´s lines:

“Dear Roberto,
I have addressed your thought and everything what you said to Dani, he is happy as always and he was acting like dialing phone to you by saying Roberto,Robeto….”endet neh” means like how are you Roberto“.

“Dani is getting better with  his urinary problems, and he is even in good mood after the adjustment of his epilepsy drug (phenobarbital).
As you said Dr Zenebe’s plan of treatment is caring and seems well planned,after we have made multiple Doctors visit,Dr Zenebe give as a better clinical judgement and opinion so what we have here is that to follow his plan of treatment,as I explained for you,Dani will have the appointment in January 31,2014 as part of his continuous follow-up,to see whether there is need for shunting or not,and other symptoms“. 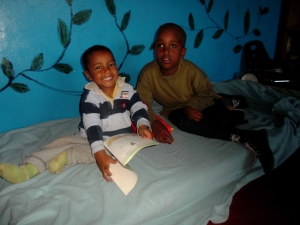 “Dani is doing good and happy as always,He is keeping on his daily physiotherapy treatment“.

“Zelalem and I have taken Dani to Dr Zenebe for his appointment of two month on Monday February 2,2015.
we  have explained to Dr Zenebe that Dani was showing some sort of  withdrawal symptoms after phenobarbital is gradually reduced and finally   stopped to give for him,The Dr. decide to replace for him combination of carpamine and phenytoin instead of phenobarbital and phenytoin.
We have asked him about shunting possibility as well,he has explained,Dani has no good sign for shunting at the moment and  as that will be good to check him in follow up.And He has given one month appointment for march 02,2015 to see how he is doing with the drug combination and if there is any new symptoms as well“.

“Dani is fine and he is better with the new drug combinations and although it seems he need long period of rehabilitation time since other treatment(surgical innervation) is not done for him by this moment due to his conditions and Dr’s opinion.
Yesterday while i went to treat him,there was ceremony with children in the compound by two Ethiopian family and he was very happy I have attached some pictures while he was attending the ceremony“. 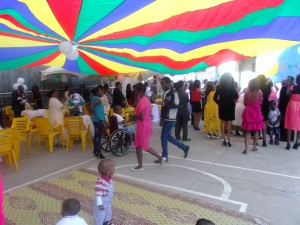